Books discussed in this essay: American Gothic Tales (edited by Joyce Carol Oates; 1996). Also see the reading list at the end of the essay.

I was recently reading an anthology of American gothic tales, spanning from the 18th century to contemporary writing. It was a good collection of stories, all suitably weird or creepy, but aside from the earliest stories, I wasn’t sure that they all truly qualified as “gothic.” That got me to thinking about what gothic means exactly and why it is my favorite sub-genre of horror.

Gothic literature has been around since at least the mid-1700s, and there are a lot of definitions of the term gothic. But academic classifications don’t get at why gothic continues to appeal, why we keep writing and reading gothic stories. The earliest gothic fiction, by authors like Ann Radcliffe and Horace Walpole, were by their very nature melodramatic and unrealistic; they made an easy target for parody, such as what Jane Austen does so skillfully in Northanger Abbey, but they set the stage for two-and-a-half centuries of great writing by such diverse authors as Mary Shelley, Charlotte and Emily Bronte, Rebecca du Maurier, Shirley Jackson, Flannery O’Connor, Joyce Carol Oates, and Anne Rice (yes, I’m leaving out the guys, of which there are many, but this is a site about horror by women).

A story has to have three essential ingredients for me to consider it truly gothic.

The first ingredient is by necessity an element of the uncanny. Gothic literature is concerned with the thin spaces, such as between the material and nonmaterial worlds, or between life and death–even the gaps between universes. What lurks in those spaces we don’t know and can’t comprehend. Spirits haunt this realm; supernatural beings lurk in the corners; madness lies within. This is not the place for shiny glass and steel skyscrapers; there are no spaceships or computers here. Gothic fiction stands in opposition to science fiction–it’s about what we cannot know rather than what we can discover, and it has a marked sense of fatalism as opposed to optimism. Neither is it the realm of realistic fiction, of suburbs and apartment buildings and cocktail parties. Gothic fiction eschews everyday experience for the extraordinary, the bizarre and grotesque. It explores ideas and themes which reveal that the universe is a vaster space than we can ever hope to understand. 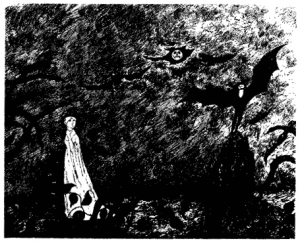 Next, gothic fiction is linked inextricably with nature. By “nature,” I don’t mean the sunny, flowering, tamed outdoors where we like to have picnics. Rather, the nature of the gothic landscape is wild, implacable, indifferent to our needs and desires, and uncontrollable despite our best efforts. Nature is always encroaching on the human world; that’s why buildings in gothic stories are usually ancient, crumbling, and moldering, and gardens are overgrown; they are constantly threatened with being overtaken by nature. When people enter natural spaces in gothic stories, they find themselves in treacherous, menacing environments: tangled forests, fetid swamps, windswept moors, craggy peaks, bottomless black lakes. The weather is also hostile; usually, it’s foggy or snowing, or a storm is raging. Animals are mysterious, feral, imbued with unsuspected powers.

The natural aspect of gothic fiction reflects the dark region inside our own psyches, as we too are a part of nature, even though we frequently strive to deny it. This is the final ingredient. Gothic literature delves into our depths to disclose the darkness within: the acts we believe ourselves incapable of, the feelings we hope to bury and ignore. It subverts our pretense to civilization and reminds us that we are all susceptible to death and decay, that there is no escaping it. In gothic literature, our inner human nature, like the natural world itself, is uncontrollable and governed by forces we cannot fully comprehend. In gothic fiction, the prevailing emotion is fear, and that quite often leads to madness. Trying to look what we can’t comprehend square in the face is enough to drive anyone insane.

In the gothic worldview, humankind is incapable of complete understanding of the universe; we’re just fooling ourselves if we think we can know or discover everything. The real truth is that we are a very insignificant part of a vast, indifferent universe, a truth that, once acknowledged, might drive you insane. Or it might just set you free.